This is the newer, more general version of NEST in situ framework.

The in situ pipeline consists of a set of libraries that can be integrated into neuronal network simulators developed by the HBP to enable live visual analysis during the runtime of the simulation. The library called ‘nesci’ (neuronal simulator conduit interface) stores the raw simulation data into a common conduit format and the library called ‘contra’ (conduit transport) transports the serialized data from one endpoint to another using a variety of different (network) protocols. The pipeline currently works with NEST and Arbor. Support for TVB is currently in development.

Prototypical implementation into the HPAC Platform finalised in February 2019.

The Multi-View Framework is a software component, which offers functionality to combine various visual representations of one or more data sets in a coordinated fashion.  Software components offering visualization capabilities can be included in such a network, as well as software components offering other functionality, such as statistical analysis. Multi-display scenarios can be addressed by the framework as coordination information can be distributed over network between view instances running on distributed machines.

The framework is composed of three libraries: nett, nett-python and nett-connect. nett implements a light-weight underlying messaging layer enabling the communication between views, whereas nett-python implements a python binding for nett, which enables the integration of python-based software components into a multi-view setup. nett-connect adds additional functionality to this basic communication layer, which enables non-experts to create multi-view setups according to their specific needs and workflows.

The development of Monsteer was co-funded by the HBP during the Ramp-up Phase. This page is kept for reference but will no longer be updated.

Monsteer is a library for Interactive Supercomputing in the neuroscience domain. Monsteer facilitates the coupling of running simulations (currently NEST) with interactive visualization and analysis applications. Monsteer supports streaming of simulation data to clients (currenty only spikes) as well as control of the simulator from the clients (also kown as computational steering). Monsteer’s main components are a C++ library, an MUSIC-based application and Python helpers.

MSPViz is a visualization tool for the Model of Structural Plasticity. It uses a visualisation technique  based on the representation of the neuronal information through the use of abstract levels and a set of schematic representations into each level. The multilevel structure and the design of the representations constitutes an approach that provides organized views that facilitates visual analysis tasks.

Each view has been enhanced adding line and bar charts to analyse trends in simulation data. Filtering and sorting capabilities can be applied on each view to ease the analysis. Other views, such as connectivity matrices and force-directed layouts, have been incorporated, enriching the already existing views and improving the analysis process. This tool has been optimised to lower render and data loading times, even from remote sources such as WebDav servers.

The development of VIOLA was co-funded by the HBP during the Ramp-up Phase. This page is kept for reference but will no longer be updated.

VIOLA (VIsualizer Of Layer Activity) is a tool to visualize activity in multiple 2D layers in an interactive and efficient way. It gives an insight into spatially resolved time series such as simulation results of neural networks with 2D geometry. The usage example shows how VIOLA can be used to visualize spike data from a NEST simulation (http://nest-simulator.org/) of an excitatory and an inhibitory neuron population with distance-dependent connectivity.

NeuroScheme is a tool that allows users to navigate through circuit data at different levels of abstraction using schematic representations for a fast and precise interpretation of data. It also allows filtering, sorting and selections at the different levels of abstraction. Finally it can be coupled with realistic visualization or other applications using the ZeroEQ event library developed in WP 7.3.

This application allows analyses based on a side-by-side comparison using its multi-panel views, and it also provides focus-and-context. Its different layouts enable arranging data in different ways: grid, 3D, camera-based, scatterplot-based or circular. It provides editing capabilities, to create a scene from scratch or to modify an existing one.

ViSimpl, part of the NeuroScheme framework, is a prototype developed to analyse simulation data, using both abstract and schematic visualisations. This analysis can be done visually from temporal, spatial and structural perspectives, with the additional capability of exploring the correlations between input patterns and produced activity.

NeuroTessMesh provides a visual environment for the generation of 3D polygonal meshes that approximate the membrane of neuronal cells, starting from the morphological tracings that describe neuronal morphologies. The 3D models can be tessellated at different levels of detail, providing either a homogeneous or an adaptive resolution of the model. The soma shape is recovered from the incomplete information of the tracings, applying a physical deformation model that can be interactively adjusted. The adaptive refinement process performed in the GPU generates meshes, that allow good visual quality geometries at an affordable computational cost, both in terms of memory and rendering time. NeuroTessMesh is the front-end GUI to the NeuroLOTs framework. 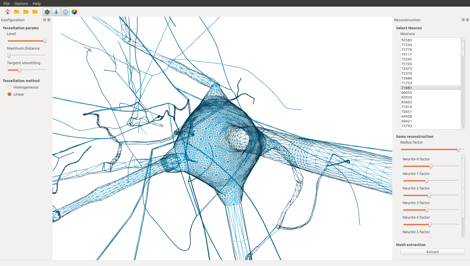 The development of VisNEST was co-funded by the HBP during the Ramp-up Phase. This page is kept for reference but will no longer be updated.

VisNEST is a tool for visualizing neural network simulations of the macaque visual cortex. It allows for exploring mean activity rates, connectivity of brain areas and information exchange between pairs of areas. In addition, it allows exploration of individual populations of each brain area and their connectivity used for simulation.

The development of ViSTA Virtual Reality Toolkit was co-funded by the HBP during the Ramp-up Phase. This page is kept for reference but will no longer be updated.

The new version 1.15 provides the following new features as compared to version 1.14 that was part of the HBP-internal Platform Release in M18. It is available on SourceForge: http://sourceforge.net/projects/vistavrtoolkit/

The development of Equalizer was co-funded by the HBP during the Ramp-up Phase. This page is kept for reference but will no longer be updated.

Equalizer is a parallel rendering framework

The development of Deflect Client Library was co-funded by the HBP during the Ramp-up Phase. This page is kept for reference but will no longer be updated.

Deflect is a C++ library to develop applications that can send and receive pixel streams from other Deflect-based applications, for example DisplayCluster. The following applications are provided which make use of the streaming API:

The development of RTNeuron in the HPAC Platform was co-funded by the HBP during the second project phase (SGA1). This page is kept for reference but will no longer be updated.

RTNeuron is a scalable real-time rendering tool for the visualisation of neuronal simulations based on cable models. Its main utility is twofold: the interactive visual inspection of structural and functional features of the cortical column model and the generation of high quality movies and images for presentations and publications. The package provides three main components:

A wide variety of scenarios is covered by rtneuron-app.py. In case the user needs a finer control of the rendering, such as in movie production or to speed up the exploration of different data sets, the Python wrapping is the way to go. The Python wrapping can be used through an IPython shell started directly from rtneuron-app.py or importing the module rtneuron into own Python programs. GUI overlays can be created for specific use cases using PyQt and QML.

RTNeuron is available on the pilot system JULIA and on JURECA as environment module.

The development of Remote Connection Manager (RCM) was co-funded by the HBP during the Ramp-up Phase. This page is kept for reference but will no longer be updated.

The Remote Connection Manager (RCM) is an application that allows HPC users to perform remote visualisation on Cineca HPC clusters.

The tool offers to

The graphical interface of RCM allows the HPC users to easily create remote displays and to manage them (connect, kill, refresh).

The development of Livre was co-funded by the HBP during the Ramp-up Phase. This page is kept for reference but will no longer be updated.

Livre is an out-of-core rendering engine that has the following features:

The development of DisplayCluster was co-funded by the HBP during the Ramp-up Phase. This page is kept for reference but will no longer be updated.

DisplayCluster is a software environment for interactively driving large-scale tiled displays. It provides the following functionality: