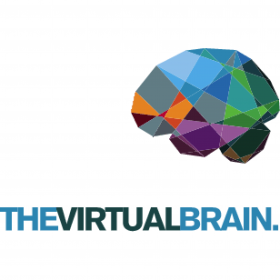 The Virtual Brain (TVB) is a large-scale brain simulator. With a community of thousands of users around the world, TVB has become a validated, popular and standard choice for the simulation of whole brain activity. TVB users can create simulations using neural mass models which can produce outputs for different analysis and modalities. TVB allows scientists to explore and analyze both simulated and experimental data. It contains analytic tools for evaluating relevant scientific parameters in light of that data. The current implementation of TVB is written in Python, with limited large-scale parallelization over different parameters. The objective of TVB-HPC is to enable large-scale parallelization of TVB simulations by making use of high performance computing to explore large parameter spaces for the models. With this approach, neuroscientists can define their models in a domain specific language based on NeuroML and automatically generate code which can run either on GPUs or on CPUs with different architectures and optimizations. The result is a framework that hides the complexity of writing robust parallel code and offers neuroscientists a fast and efficient access to high performance computing. TVB-HPC is publicly available on GitHub and, at the end of HBP project phase SGA2, it will be possible to launch large parameter simulations using code automatically generated with this framework via the HBP Collaboratory.

This is the newer, more general version of NEST in situ framework.

The in situ pipeline consists of a set of libraries that can be integrated into neuronal network simulators developed by the HBP to enable live visual analysis during the runtime of the simulation. The library called ‘nesci’ (neuronal simulator conduit interface) stores the raw simulation data into a common conduit format and the library called ‘contra’ (conduit transport) transports the serialized data from one endpoint to another using a variety of different (network) protocols. The pipeline currently works with NEST and Arbor. Support for TVB is currently in development.

Prototypical implementation into the HPAC Platform finalised in February 2019.

MSPViz is a visualization tool for the Model of Structural Plasticity. It uses a visualisation technique  based on the representation of the neuronal information through the use of abstract levels and a set of schematic representations into each level. The multilevel structure and the design of the representations constitutes an approach that provides organized views that facilitates visual analysis tasks.

Each view has been enhanced adding line and bar charts to analyse trends in simulation data. Filtering and sorting capabilities can be applied on each view to ease the analysis. Other views, such as connectivity matrices and force-directed layouts, have been incorporated, enriching the already existing views and improving the analysis process. This tool has been optimised to lower render and data loading times, even from remote sources such as WebDav servers.

The development of VIOLA was co-funded by the HBP during the Ramp-up Phase. This page is kept for reference but will no longer be updated.

VIOLA (VIsualizer Of Layer Activity) is a tool to visualize activity in multiple 2D layers in an interactive and efficient way. It gives an insight into spatially resolved time series such as simulation results of neural networks with 2D geometry. The usage example shows how VIOLA can be used to visualize spike data from a NEST simulation (http://nest-simulator.org/) of an excitatory and an inhibitory neuron population with distance-dependent connectivity.

The development of InDiProv was co-funded by the HBP during the Ramp-up Phase. This page is kept for reference but will no longer be updated.

This server-side tool is meant to be used for the creation of provenance tracks in context of interactive analysis tools and visualization applications. It is capable of tracking multi-view and multiple applications for one user using this ensemble. It further is able to extract these tracks from the internal data base into a XML-based standard format, such as the W3C Prov-Model or the OPM format. This enables the integration to other tools used for provenance tracking and will finally end up in the UP.

The development of RTNeuron in the HPAC Platform was co-funded by the HBP during the second project phase (SGA1). This page is kept for reference but will no longer be updated.

RTNeuron is a scalable real-time rendering tool for the visualisation of neuronal simulations based on cable models. Its main utility is twofold: the interactive visual inspection of structural and functional features of the cortical column model and the generation of high quality movies and images for presentations and publications. The package provides three main components:

A wide variety of scenarios is covered by rtneuron-app.py. In case the user needs a finer control of the rendering, such as in movie production or to speed up the exploration of different data sets, the Python wrapping is the way to go. The Python wrapping can be used through an IPython shell started directly from rtneuron-app.py or importing the module rtneuron into own Python programs. GUI overlays can be created for specific use cases using PyQt and QML.

RTNeuron is available on the pilot system JULIA and on JURECA as environment module.

The development of Livre was co-funded by the HBP during the Ramp-up Phase. This page is kept for reference but will no longer be updated.

Livre is an out-of-core rendering engine that has the following features:

The development of DisplayCluster was co-funded by the HBP during the Ramp-up Phase. This page is kept for reference but will no longer be updated.

DisplayCluster is a software environment for interactively driving large-scale tiled displays. It provides the following functionality:

Due to a major project-internal reorganisation, this website will no longer be updated after March 2020.

More recent information can be found on humanbrainproject.eu and ebrains.eu.
Information about the Fenix Research Infrastructure and the ICEI project, including resource access, are available on their website.

Follow EBRAINS Computing Services @HBPHighPerfComp and Fenix RI @Fenix_RI_eu on Twitter to learn about the most recent developments and to get to know about upcoming opportunities for calls and collaborations!